"Sea" Goes To The International Court, Albania And Greece Agree 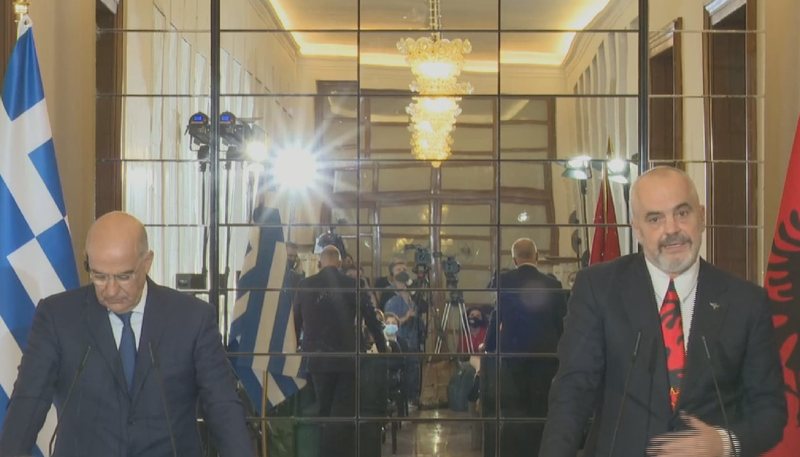 Albania and Greece agree. The maritime issue will be resolved by a third party, which will be the International Court of Justice.

Greek Foreign Minister Nikos Dendias was in Tirana today as part of an official visit where he underlined that “resolving this divergence will be beneficial for both countries”.

Prime Minister Edi Rama and Greek Foreign Minister Nikos Dendias were in a press release when they announced the agreement on the issue of the sea, but also the other highly controversial issue, the law of war.

Edi Rama: “This issue will not be at the discretion of us or Greece and we fully agree. I am very clear that today everyone has their ears open to hear about the next invasion that Greece will make to Albania by sea but will not have power.

I'm sorry the sea patriots will be disappointed. We have agreed to address this issue in international instances. Together, Albania and Greece will turn to international justice to place points on the "I" based on expertise and international law on the sea.

I am sorry for the patriots of the sea, but the issue of the sea is not an issue with which they can make neither their slanderous anti-Greek propaganda, which is a shame, nor the political electorate in Albania or Kosovo. To decide on other issues."

Nikos Dendias: Both with the Prime Minister and Minister Cakaj we discussed the issue of determining the maritime space between Albania and Greece.

Resolving this divergence will be beneficial for both countries and I have certainly heard with high interest the agreement of Mr. Rama said that the solution of this issue will be based on the UN agreement, where we signed.

Analyzing this issue we have agreed to move on to International Law, In The Hague Tribunal.

This agreement between Albania and Greece is based on a position of both countries in resolving any convergence and divergence. We relied on the 1996 agreement, where we agreed that there is a need for deepening and a dynamism to move together to move forward in terms of the two countries' strategies.

We do not move the problems to Brussels

Edi Rama: “I publicly thanked for the fact that despite certain moments in the history of these relations where we had tension, the truth is that Greece has never been an obstacle to Albania's integration into the EU.

We fully agree on the fact that the issues we need to resolve together are not issues that are resolved for export to Brussels. We do not need Brussels to put us ahead of the obligation, nor does Greece.

I do not see any of the issues unresolved. They are solvable and we are on the way to solving them:

We are starting the work for the organization of the meeting of the two governments to deal with issues that are important for our children and our people. Issues of national folk patriotism are not issues of our governments."

Edi Rama: “The common path of the future as two neighbors that we have not chosen each other but we are together under the same sun and we have the obligation to the generations to do the best.

Relationships, today, are better than ever for a thousand and one reasons that are known and that we just have to raise to the same level of expectations, hopes of our people.