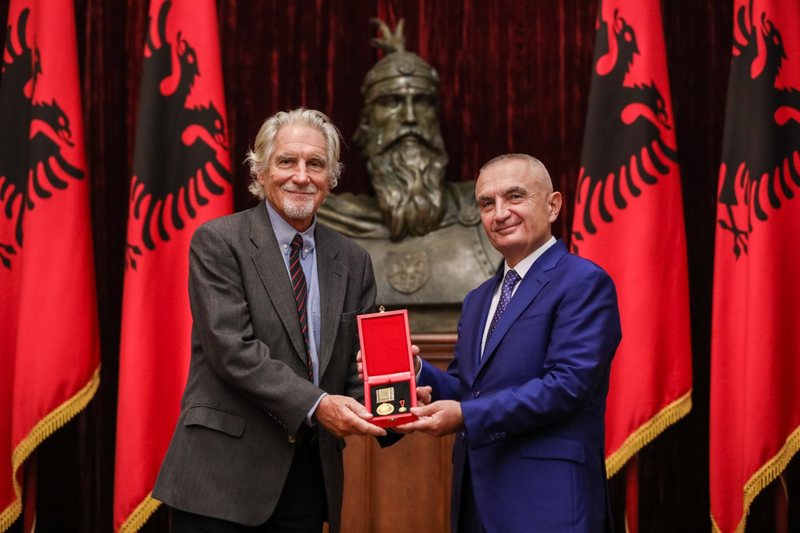 The President of the Republic Sh.T.Z. Ilir Meta praised the well-known scholar of Albanian emigration, Professor Russell King with the title "For Special Civil Merits", with the motivation: "As a sign of gratitude for his several years of scientific research activity in international studies, publications and conferences, being ranked as one of the most famous researchers in the field of Albanian emigration in Europe.

In appreciation of his tireless work for sensitizing Albanian and foreign youth, students and scholars to this social phenomenon, an important issue for Albania and its future ".

In his greeting speech to those present at the solemn decoration ceremony, the President of the Republic focused on the disturbing phenomenon of depopulation.

If per 1000 inhabitants today emigrate to the European Union from Albania about 12 people, from Kosovo emigrate 3.3 people, from Northern Macedonia 2.3 people, from Serbia 1 person, from Montenegro 0.7 people and from Bosnia and Herzegovina 0.6 people.

This is and should be considered an alarm why not a national disaster, if it continues one more day.

President Meta expressed concern that as a result of this emigration, Albania is losing its most precious capital, the human capital and in the first place the talented and well-educated young people in universities inside and outside the country.

"The migration in general, of young people and intellectuals from Albania in particular, is increasingly taking on the features of mass brain drain, the cost of which could be fatal for the country and the nation in the future.

That is why we need a reflection from the entire political class and our society, to say stop to the depopulation of Albania, the return of trust in the first place to the young people for the European future of our country."